Stuart, who is the Convenor of the Scottish Parliament’s Cross-Party Group for Visual Impairment, has been working with Scottish War Blinded and Royal Blind to help improve support for local veterans with sight loss.

The visit aimed to highlight the first-class service offered freely to visually impaired veterans at the Hawkhead Centre, and at home via their outreach service which provides one-to-one support in adapting to sight loss, along with specialised independent living advice and equipment.

In inviting staff from Inverclyde HSCP to see the Centre and learn more about what the veterans’ charity offers, Stuart hopes more local veterans are referred to the service.

“I’m grateful to Scottish War Blinded for hosting this visit so that we could see more of what the Hawkhead Centre offers to visually impaired veterans regardless of how they came to lose their sight.

“Only a handful of veterans living in Inverclyde are using the Hawkhead Centre’s services and accessing the charity’s support at home, but I’m sure there are more eligible veterans who could benefit, which is why I invited representatives from Inverclyde HSCP to try to improve referral rates locally.

“As well as offering specialist support that can help visually impaired veterans regain their independence and improve their mobility, Scottish War Blinded can provide equipment to veterans they can take home that will help them live more independently.

“If you know someone living with sight loss, whether partially or fully, who worked for at least one day in the forces or did their national service, please encourage them to become a member of Scottish War Blinded for free so they can access and make full use of the Hawkhead Centre.”

“Scottish War Blinded is supporting a number of veterans from Inverclyde who are living with sight loss, both through services provided at the Hawkhead Centre and the work of our Outreach Team. We know there are more veterans in the area who could benefit from our support.

“Our work aims to support the independence of veterans after sight loss – helping them get back confidence they have often lost and develop new skills and friendships. Stuart McMillan has been a great supporter of the charity in his important role as Convener of the Cross Party Group on Visual Impairment, and we are delighted he is working with us to raise awareness of Scottish War Blinded in his constituency.”

“Scottish War Blinded’s Hawkhead Centre provides a range of services which can play a crucial role in helping visually impaired people to live safely and independently in their own homes for longer. The fact-finding visit was important as it brought home to staff from Inverclyde’s Health & Social Care Partnership the fact that Scottish War Blinded has a very wide definition of what it is to be a veteran. Scottish War Blinded provides free help to anyone who did National Service or worked for even one day in the forces. But often these people don’t class themselves as veterans.

“The visit raised awareness amongst staff about how important it is to ask the right questions to tease out this information. Scottish War Blinded will always go out and assess someone who has been referred to them to see what services best suit their needs. I’m certain this new awareness amongst staff will have a positive impact for visually impaired veterans in Inverclyde.” 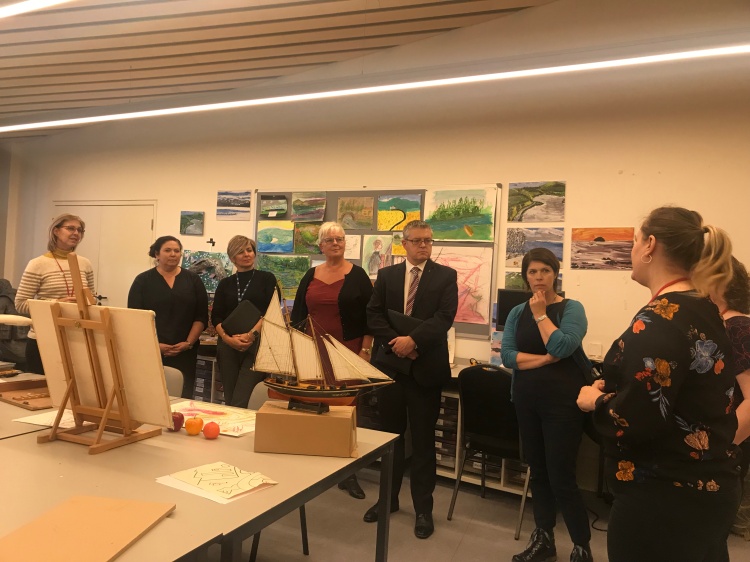